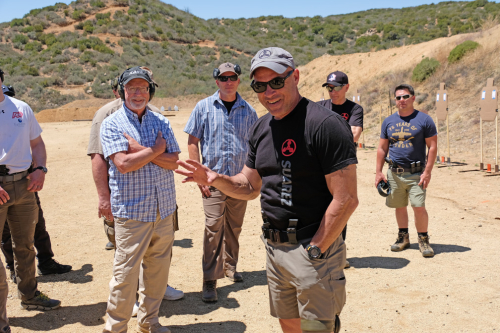 For many, the study of gunfighting is like a religion. In religion, one has a canon and expectations that if you attend service and say the right words, you are sure to go to heaven. In the American study of gunfighting it is the same. There is a commonly accepted way to shoot, and it is confirmed by the rituals conducted on the shooting range. If you execute the ritual (dare I say) religiously, everything will work out for you. And then, if you say the right words at the right time, everything will work out well and you shall surely be saved as the prophet has promised. (At this point all will turn to the images of the prophets and bow deeply, eyes on the deck).

And anything not in that canon of belief is pagan, and outlandish...beyond the pale as one writer states. But the extremists in every faith have always held back progress as progress is something they fear. They fear it because it may invalidate that which they hold so sacred. Dynamic reactive movement was that, and still is in many venues. Nobody quite does it like us barbarians. Force on force, Red Dots, Appendix Carry. You who were here from the beginning know all of this.

One new area we have ventured into is the After The Last Bang series. I think this will potentially disrupt an entire fear-based industry. The After The Last Bang series of courses teaches everything necessary to not make poor choices in the self defense shooting realm, as well as the use of language to explain and justify your actions. Attendees agree unanimously that this is very dangerous material as well as potentially life changing material for one that is presented with the question by law enforcement - "what happened?"

But just as important in my opinion is the development of the mental aspects of the process. The next frontier of fighter development. And I mean to go so far beyond the Color Code and the Combat Mind Set discussions as to make them seem like paper airplanes compared to a Jedi X-wing Fighter. I saw the need for this when Eric Tull gave his presentation at the Interview and Investigation management Class last month. He performed admirably when facing certain death. He related how all his actions, everything he did in that fight, from drawing to moving off the X, to firing, all happened without a direct thought. He was experiencing the flow I discuss so often...mindlessly.

And that aspect, that altered state of flow, has been a focus of study for the special operations world, for action athletes, and others seeking peak levels of performance, for decades. I experienced it in my gunfights, on the beach, at the 7-11, and in foot pursuit of the home invaders. I have written about this many times and spoken of it in class and the looks I get back are mixed. Sometimes I will get a knowing nod from a former combat pilot, or a long time martial arts guy with lots of combat experience, but the majority don't get it. It is my hope that this subsection will help everyone get it. The benefits are the ability to react mindlessly to what is presented with no thought of self, and to make the correct trained decision without the interruptions of emotions. It is a self-image that leads to calm and rational thinking under the sort of duress that would melt another man. And it is my hope to put it in your grasp.

And it is my opinion that it can be developed in safety so that it can be activated like a mechanical device by presented events, and on demand. There are no secrets to doing this, but the methods of achieving will be outside the realm of the canon of the parochial pistoleers.

Mushin is one of those terms/concepts. This pure state of mind, of pure mental clarity, is produced by the absence of self-focus. A Mushin mind is not an empty mind like an empty shell, on the contrary, is it a mind fully present and aware, but free of concerns over what just happened, or what will likely happen next. "Mu" or "emptiness" in Mushin refers to an empty mind in the sense that distractions, preoccupations, fears, worries, are absent and are not a present issue.

The concept of Mushin is identical to the Japanese metaphorical expression "Mizu no Kokoro" or the "mind like still water." This mental attitude refers to a mind that is in the total present moment and a good comparative analogy would be a still pond of water without any ripples where the surface reflects a clear and perfect image of the surroundings, like a mirror. Thus a man with that type of focus (and it is that...a type of mental focus) can act and react to things presented instantly and mindlessly with no concerns over the past or the future.

Mushin cannot be grasped by the intellect; it must be experienced. A Mushin mind is achieved when a person's mind is free from anger, fear, judgment or the ego during combat or everyday life.